Bringing a baby into the family turns the routine upside down! It is necessary to take care of sleeping, bathing and, above all, ensuring that all these activities are being carried out in the best possible way to avoid complications for the newborn’s health.

And when it comes to breastfeeding, the monitoring is intense: it is necessary to make sure that the attachment is correct so that the baby does not hurt the mother’s breast, create calluses in the mouth or suck a lot of air and end up colic, in addition to understanding the emptying time of each breast and the intervals between one and the other so that the newborn is well fed and able to grow healthy.

But yes, if you’re a first-time mom and a fan of free demand, it’s often hard to think about all of this at every feed. But that’s where a facilitator comes in: why not resort to a helper, or rather an app to help with breastfeedingO?

Of course, it does not replace the guidance of a breastfeeding consultant or pediatrician, but it can be an extra item to help with the routine of breastfeeding. From simple records of milking times to complex graphs of the child’s development, breastfeeding apps available on the market can act as a support for the nursing mother. Check out some that are worth testing:

Which is? – One of the most complete apps in its category, Baby+ is the perfect option for the mother who wants to control and understand every bit of her baby’s routine, but doesn’t give up on a cute and customizable interface!

Monitoring of breastfeeding is done with just one click in the right or left breast and the statistics organized in a separate graph between dates and times. The app does not let the little ones who are starting to introduce food or who love a bottle, as it has control buttons for the extraction of milk and solids.

In addition to breastfeeding data, it is possible to add information about the baby, such as its growth, vaccination, temperature, medication and even monitor the diaper situation (dirty, mixed, wet) and the peaks of crying or sleep. Ufa! There will be no shortage of statistics to be followed.

Because it’s cool? – It’s the “Memories” tab that makes the app special. In it, the mother can make notes in the form of a diary, monitor the growth of the little one’s teeth, record the date of special milestones (first smiles or babbles) and, best of all, create a personalized gallery of the child, with daily photos of her face or new occasions (such as the first walk or the first meal).

Finally, the app also offers guides on basic care for the little one, suggestions for activities for each age, organization of appointment dates, special music for sleeping time and much more. 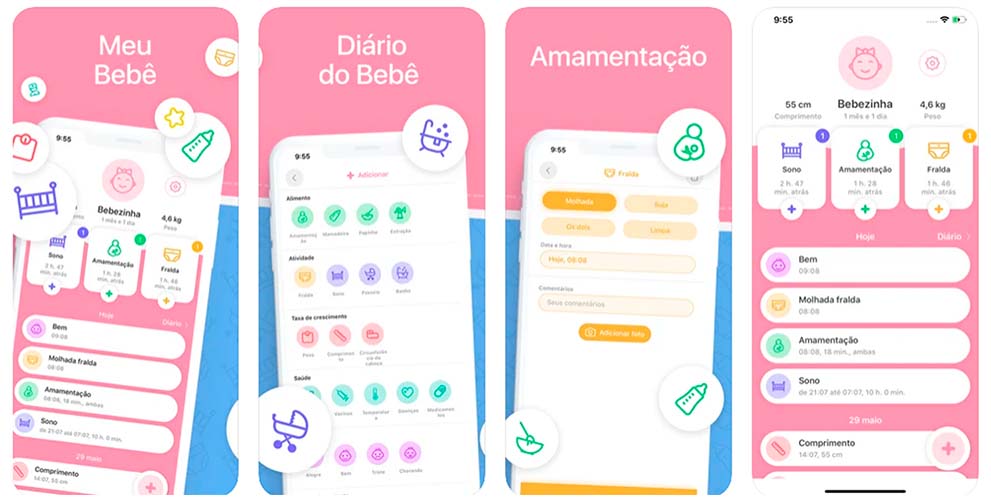 Which is? – If the mother prefers practicality and a simple and straightforward interface, maybe the best choice is My Baby. The app concentrates all its functionality in a single tab and the records are organized in a chart by date.

Because it’s cool? – Despite its simplicity, the application is as efficient as the others. Breastfeeding is monitored with just one click on each breast and there is space to add bottle, baby food and milk extraction records.

The other tools work the same way. Among them, we have the monitoring of sleep, the state of the napkins, baths, the baby’s growth, medical appointments, etc.

And the cute touch of the app is the fact that the mother can add a photo of the little one to each information she records in the app. In addition, it can also monitor baby’s mood (cheerful, crying, well…) and note the date of important milestones, such as the first word or tooth.

Which is? – LactApp (originally in English, but language can be changed in settings) is one of the applications focused on breastfeeding. But its differential lies in the fact that, in addition to recording the child’s data, it serves as a source of information and support for the mother. The home page has a blog full of publications on the basics of breastfeeding, proper attachment, breast pain and much more.

Because it’s cool? – The woman has the possibility to create a personalized plan to reconcile situations such as breastfeeding and back to work or even relactation.

LactApp also allows the mother to control the little one’s grips in two ways: quick or detailed. In the first option, the control is done by time, with just one click. In the second, the app allows women to fill in parameters such as pain intensity, nipple shape and color, presence of white dots and even emotional state. Very specific!

The other features simply control the baby’s weight and the poop so that the mother can fully visualize the baby’s feeding progress.

Because it’s cool? – The features are the same in both versions and the focus is on controlling the little one’s feed in an uncomplicated way. As with other apps, the mother can time each feed with just one click and get reports organized by dates.

In addition, other parameters are also available, such as sleep, milk withdrawal, diapers and even walks. Not to mention the reminders, which notify the mother at the times of each activity.

Which is? – Following the line of simple interface apps, the Breastfeeding Registry is focused on the basic activities of the little one. If the mother is only looking for notes of dates and times of tetê or sleep, for example, it can be a good option.

Because it’s cool? – For who doesn’t have time or interest in browsing through many features, the application has only one tab and, despite allowing the monitoring of diaper changes, growth and even baby activities, all the tools work in the same way.